I just recently started a Twitter account. I avoided Twitter like the plague for a long time, because I thought it was a time-sucking bunch of inane drivel. Then, a few months ago, my friend Tom Racine (@talltaleradio) convinced me to start writing a blog. Then, he said, “You have to get a Twitter account to promote it.” I replied that I didn’t want to and he couldn’t make me, because he is not my Dad. For a few days, however, the thought kept nagging at me. What if he was right? What if the little push my fledgling blog needed was a few simple tweets? 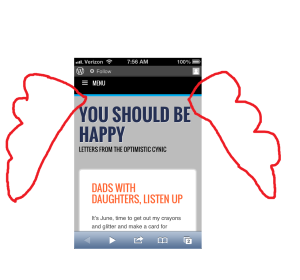 It has worked just as well as my MSPaint skills would indicate.

I went out to Twitter and looked up a couple of variants of my blog name, You Should Be Happy. Wow…no one had chosen “@YouShouldBHappy” yet! I’m not sure what happened after that. I think it was a bit like an auction, where you end up buying that box of garbage for $500—because if that other guy is bidding, it must be awesome. I thought that I’d better snap that up, because when my blog hits the big time, someone else might take it and try to capitalize on my success. How lucky for me that it wasn’t taken! What an opportunity! Don’t let it pass me by, oh please don’t let someone else be poised with their finger above the enter key before I can make it MINE.

So, I signed up for Twitter. I felt kind of dirty and didn’t really want to tell anyone about it, sort of like that time that Carlos Danger sent me that picture online. I made a tiny mention of it. Two of my friends followed me right away. And then a Complete Stranger followed me. I thought he must have picked it up from one of my other friends, because they are both into comics (the art kind, not the onstage kind). Cool! A Complete Stranger (sort of) is interested in seeing my tweets! Yeah! I followed him back, just to be nice. You see how naïve I am? I didn’t realize about the quid pro quo out there…

Until…another Complete Stranger followed me! A COMEDIAN. For me, well, this was great news. He is a *corporate COMEDIAN, but still. He had a couple of thousand followers. This was going to be fantastic. My Twitter future was looking bright. Two days later… he unfollowed me. I guess I didn’t follow him back fast enough. I thought:

“Maybe I should follow him, and see if he refollows me. At the very least, I can unfollow him a couple of days later, and see how HE likes it.”

So I did, and he didn’t, and I did. I’m not proud of that. I should have just passed a note to my BFF during third period that said, “Kevin is a big jerk! We won’t EVER talk to HIM again!!!!!” (Please note, his real name is Kevin, with a K, just like I’ve spelled it here. Feel free to find him and give him a piece of your mind.) 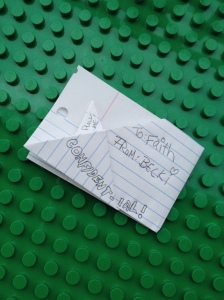 Miss Craig, would you like to bring that up to the front of class and read it for everyone? – Rhetorical Question Teacher

I’ve been out there for a couple of months now. I am baffled by the behavior of what I believe to be adults, for the most part. Here are the strangest behaviors that I’ve seen:

Oh, I see, it’s a protection racket. Pay up, or you might have a little “accident,” if you know what I mean…

The whole experience is a bit like Student Council Elections in the 8th Grade. Millions of people competing to be Class President, with homemade marker and glitter signs. The cool kids…are already the cool kids. The wanna-be crowd is unlikely to become the cool kids. There are a few stand-outs who have made reputations, and built followings, based on the quality of what they have to say, including how they condense it into as few characters as possible. That’s cool. I’m not going to cancel my Twitter account, even though I don’t much like the overall vibe or the medium. After all, I have to keep telling my six followers about updates to the blog. I’m sure it is the highlight of that Norton Support guy’s day.

Oh…and follow me at @YouShouldBHappy. There’s a little clicky button on the side of the page right there.

Postscript: I now have five followers. The guy who draws the incredibly violent comic book has unfollowed ALL of his Twitterites except the Rajneesh. The actual Rajneesh who took over Antelope, OR, with his fleet of rainbow Cadillacs. Being a Native Oregonian, I remember the news coverage of the Rajneesh and his actions, many of which were not as above-board as you might think a “spiritual leader’ would strive for, including the first act of domestic bioterrorism. The Rajneesh has been dead for 23 years, and is still annoying Oregonians from the grave. Well played, sir.

[1] Kittyfriending is the process of getting all right up into someone’s face and meowing repeatedly until they break down and pet you. Kittyfriend was a neighborhood stray at our first house; he was aggressively friendly to the point of absurdity, which was oddly charming. Long live beautiful, scraggly, big-hearted Kittyfriends.

[2] I finally got this lunatic unfollowed. Two days later, Twitter sent me an e-mail suggesting other accounts that were like “@nutzball.” I guess this was to help me find the right kind of crazy, because I obviously wanted some crazy in my feed.