So… where’ve I been?  What happened?  Did I think that last awesome post about socks was the penultimate piece of writing I was ever going to do, and retire to the seclusion of my private island?  Well, no.  My private island is currently caught up in some red tape over “somebody can’t own an iceberg” and “polar bears don’t even use money” and “we don’t believe that you bought this from a polar bear.”   If you are still here, I owe you an explanation, and an apology, but it’s not going to be the explanation you expect, and the apology isn’t for not being here writing something funny exactly.

First, I haven’t been writing.  At least, I haven’t been finishing.  That’s pretty much the explanation.  I haven’t finished anything because I have been trying to get more sleep.  It turns out that getting five hours of sleep every night sort of does in a person’s ability to be a full-time parent and general purpose human being.  In a bid to improve everything, I’ve been trying to be in bed by 11:00PM every night.  Yes, “trying to be in bed by 11:00PM.”  And still failing part of the time.  Let me walk you through our “routine.”

8:00AM Get out of bed after checking Facebook, put coffee in self and self in shower

8:30AM Wake up Thing One (four-year-old boy) and Thing Two (two-year-old girl)

8:30 AM-6:30PM  All hell breaks loose and nothing gets done that is not immediately undone, or offset by something else

6:30PM-9:30PM Dinner and running and maybe some time to start the cleaning while Daddy entertains, then the LONGEST BEDTIME ROUTINE EVER

Writing would happen after that last part.  I thank my lucky stars that the kids are not early risers.  It would have made my life an unbearable tragedy.  If you have children without the curiousity of 1,000 experimental scientists and the energy of supernovas, good for you.  I’m sure you have a nice routine that works for you.  My kids?  Not so much.  They are bright, and fun, and enthusiastic, and generally pretty happy…and as messy as a pair of cyclones.  There is currently a mural all over the basement done in sidewalk chalk.  There are Duplo blocks in a drift across the floor.  Thing One was reading some books today, so there’s a pile of books in the living room.  Thing Two was playing with the play kitchen, so there are fake bananas and plastic cans of peas on all three levels of the house.  All of her stuffed animals are out because they each needed a cuddle in her Big Girl Bed.  Etc… etc…

And the point of that ramble was… ummmm…  oh.  Right.  I can’t get that picked up until they are asleep.  No, they don’t take naps.  Naps are the devil.  Naps make them stay up all hours of the night (demonstrating that they don’t actually need one).  I would happily take a nap myself, except I would wake up from a 15 minute nap to a child on the roof and a mess that takes six or seven hours to deal with. 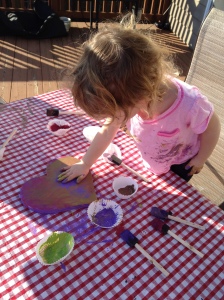 This only took an hour or so to clean up.  Score!!

And the point of that ramble was… ummmm… oh.  Right.  In order to get more sleep, I have to go to bed earlier than I was, which means no writing time.  I also sleep very poorly a lot of the time, so my 7 hour night is often less.  More sleep.  It’s a worthy goal.  Still just a goal, but I will keep working on it, and probably writing less.  I have some things I need to write, though, so if you’ll stick with me, there will be content.  I will be that friend who never remembers your birthday, but shows up at the hospital with a handmade needlework get-well card.  ‘Cause that’s pretty much who I am.

The apology.  I’m sorry.  I should have told you.  I should have set a more realistic expectation, and I should have posted a note that said, “Hey, I’m not writing anything right now because I’m exhausted.”  Now that I’ve said something, I am actually writing again, so it doesn’t really make sense.  It’s like I’ve come to explain my prodigality at the moment I want to come in and have a seat on the couch, and that is lame.  Bloggers stop blogging every day.  It’s not a special circumstance when a blog peters off into nothing…but I don’t like to think that I created a link with a reader only to flake out like all the little starry-eyed bloggers out there with big hopes and small work ethics.

All that said, I don’t have a resolution to “get back on schedule.”  I am still too exhausted to commit to that.  I will, however, say that I am still here.  I am working.  I promise not to clutter up your reader with a bunch of posts just to have posts.  I will have some new work out here soon, though, and it will be lighter than the things I started and didn’t finish.  You should be happy.