Look at that, I wrote a book. The Tiny Giant is published, available on Amazon and from my online store, and it’s really, really better than I could have hoped. I’ve been so busy with the last iteration, then the nuts and bolts of publishing, everything else got shoved to the side. A few things to know, for the writers interested in these things…

I wrote this book five times.

The final draft has a completely different ending, four new characters, and holds the third “aging” of the main character—from 8 to 12 to 11.

The first draft had 18 long chapters. The final has 35 short ones.

A whole plot line moved to the next book, and a bunch of fancy fantasy world-building crap just disappeared.

I used an editor and a professional artist/designer at the end. (DO THIS if you possibly can.)

Also, I cried, I was on fire, I was depressed, and I laughed out loud. This is not a process for the faint of heart or those lacking perseverance. There are two things that I think got me through it.

There will be a sequel, and I’ll be shopping it to traditional publishers as a series when I’m a few chapters in. I didn’t do much of that with The Tiny Giant. I felt like I wanted to learn what I was doing without the distraction–maybe that was dumb, but I still have a book and the publishers are still there. In the meantime, I’ve been doing school visits and that is terrific fun. Kids have the best questions–I might do a whole post about that experience.

If you want a fun, easy summer read, The Tiny Giant is for you. If you have kids in the 9/10+ age group around, this is great summer reading for them. There’s adventure, a dragon, and the unexpected. There are hard decisions. There are some very funny bits. Get it signed at my online store at Little Voices Publishing, or head over the Amazon and use that Prime shipping.

Now I’m working on Bitches and Dead People–all the stories are written and I’m working with a different editor on those, one with specific expertise in short fiction and some familiarity with the horror genre. It’s some fantastic writing, and I can’t wait to share it later this year.  Until then, I’ll be around a little more. Thanks for being here.

PS. Isn’t that cover the most gorgeous thing ever? Steve Ogden at Steve Ogden Art did the cover, book design, and little illustrations for each chapter head. Check him out on your fave media platform for his comics and the behind the scenes on The Tiny Giant. Here’s one of my favorite chapter illustrations. Bahahaha…. 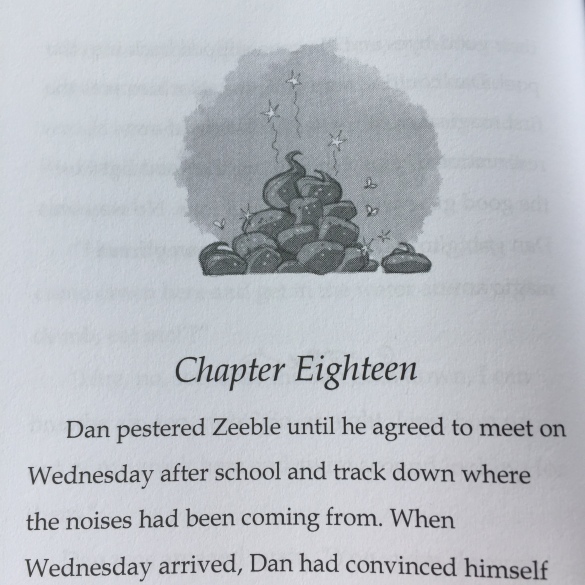 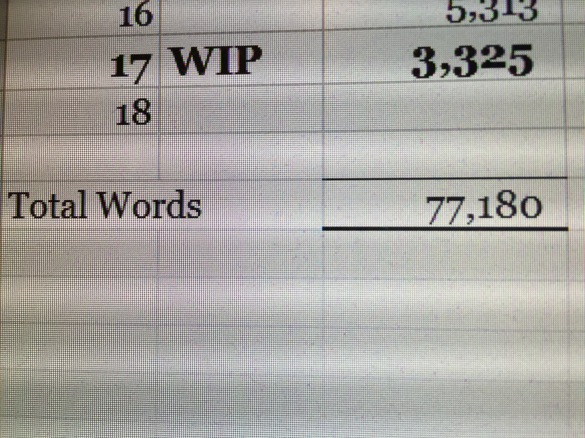 About 18 months ago, I decided to start this fantasy novel thing.  I’d had an Idea, and it wasn’t letting me ignore it (much like the two-year-old I also had), and I thought I’d better just write it so it would stop pestering me.  Much to my surprise, I seem to have cobbled enough stolen hours together to finish it.

I’m not done yet, but I am coasting into the last chapter, and the big climactic scene went in the file today.  I also have three pages of notes on Book Two, and a rough idea of Book Three, and there’s Four and Five, if I get there.  Cart, horse, I know.

In a couple of weeks, I’ll be editing.  I. Love. Editing.  I know I need to rewrite the whole beginning (of course, and for the second time), and the rest needs continuity and serious improvement.  I wrote it an hour at a time while the little girl was at preschool two mornings a week…in all honesty, it’s probably a hot mess.  So much room for improvement! That excites me, because I’m really, really strange.

My goal of a readable draft by Christmas is doable.  I’ve been hanging out admiring myself today over that.  I know that when the handful of early reader copies go out for big picture feedback, I’m going to be a nervous wreck.  Then rewrite, then figure out the crazy publishing world and see if anybody wants to take a chance on it.   If not, figure out the crazy self-publishing world, I think.

Thanks for hanging around to see what happens.  You helped.