The Ancients thought the solar eclipse
Was the wrath of the great I Am.
In modern times, there’s wrath indeed–
In this God-forsaken traffic jam.

Oregon normally has a population of around four million people, not counting Sasquatch.  On Monday, thanks to the solar eclipse, we’re supposed to have an extra million visitors in the state (and not evenly dispersed).  The traffic started yesterday, and the logjam of RVs, rental cars, and out-of-towners will only get worse.  (If you’re wondering why Oregon is especially blessed with solar tourism, we are the closest destination for all of Asia.)

We live just outside the band of totality.  I am NOT driving the 20 miles to be in totality on Monday.  We’re going to hang out with our neighbors, drink up the champagne they don’t want to move to Idaho, and not be in the car for six hours.

Side note:  That little orange dot in the glasses is the sun.  I hope everyone feels like they got their money’s worth afterwards.

We went to a wedding this weekend for one of my husband’s coworkers. I had met the affianced on a couple of occasions, and some people from the office were there, but otherwise I was swimming in a sea of strangers. Since I am naturally inclined to pop under the table when confronted with a Mass of Humanity[1], I had my best “executive wife” game face on. I was charming and engaged, offered a witty riposte when appropriate, listened with rapt attention when spoken to. (My rapt attention is a force of nature. Think of it like having Counselor Troi look deeply into your eyes and ask how you’re feeling. People spill.) I was using up my reserve of social interaction points, but not so quickly that I was worried about it.

Can you show me how to get…away from all these people? Gah. I can’t breathe.

We watched the lovely couple say their vows and moved to tables to wait for the buffet line to open. After round seventy gazillion of pictures was done, the emcee introduced the wedding party with a few personal tidbits and seated them at the head table. It turns out, the sister of the groom has a PhD in biochemistry. This is a great and wonderful thing. Lady scientists are a huge intellectual turn-on for me. It’s knowing someone’s brain size before you even have to talk to her .

Now…maybe I’ve been hanging out in the running community too much lately. Certain behaviors are more accepted there than in regular society. For example, biochemists appear not to be used to getting a “high-five for science.” When I introduced myself to the lady scientist, she was quite taken aback to have someone fangirling her over her PhD. Since there was no alcohol at this wedding (gasp!), she spent a moment evaluating whether my apparent social and/or mental deficit was dangerous or just awkward. I did get my high-five, but I also got the question, “Why?”

I confess, I didn’t have a very good explanation. I hadn’t exactly thought out what I was going to say, well, because of running. If you slap palms with someone who just finished a race, they don’t stop and say, “Why did you do that?” They say, “Woooooo!!! Damn right I’m awesome!!! Wooooo!!!” So… I probably sounded sort of stupid, which was embarrassing and confusing. “Because SCIENCE!” wasn’t an adequate answer for an actual scientist. I have a college degree and a lettery credential of my own, but I couldn’t come up with anything convincing enough to stop her from asking who had invited me and how I was related to the wedding and did I really know her brother all that well? 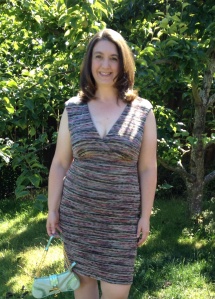 She was quiet and sort of kept to herself.  She didn’t look crazy.          – All the Neighbors After They Found the Bodies

I’ve had time to think about it a little more. Here’s what I wanted the science lady to know: Science is something that I am personally very grateful for. Science has not only saved my life, but improved the quality of my life in ways that I don’t explain to most people, because science made it so I don’t have to. I was born with a cleft lip/cleft palate. I have had five reconstructive surgeries. In the 1800’s, my chances of surviving infancy would have been very bad. Instead, I had two surgeries, and my mom fed me using specialized equipment made of those space-age plastics that were so popular in the mid-twentieth century. Then, like all cleft palate kids, I had about 471 ear infections, several of which were bad enough to have cooked my brain without antibiotics. At the very least, I would be deaf for all intents and purposes. Then, in high school, I had three reconstructive surgeries to make my appearance more symmetrical and close my palate. Oh, and ten years of orthodontia, because I had a seriously messed up snaggletooth thing going on.

There are countless ways that science touches everything we do—but science touches a lot of what I am. I do not have to explain to people what is “wrong” with my face. Sometimes people see it (generally they have a close relative with a cleft lip), but mostly they see a little scar. My speech doesn’t have the nasal echo that a cleft palate often causes. I have never thought of it as a handicap. I have, however, said many grateful prayers that I was born when and where I was (and for parents who sought out the best doctors with the best possible approach). The medical skill and technique was available. I not only survived, but thrived. I feel grateful to those scientists—the doctors, the researchers, the chemical engineers—because without their discoveries and techniques, I would be a completely different person. Science saved my life, and gave me more of a life than I could have ever hoped for 100 years before.

On top of that, when a woman goes into a field that is traditionally dominated by men, as most of STEM is—she deserves a little extra support from the rest of us. I worked at a large semiconductor company, and I’ve seen what it’s like to be the only technical woman in the room. I have an Up With Women campaign going, where I support women I know individually. It’s my own brand of microfeminism[2]. See a woman doing something cool? Run over and tell her you think it’s cool. Here’s the template: “Hey, insert name, I just wanted to tell you that I really admire how you _______________. It’s something that makes the world a better place.” End of story. Don’t add “because I can’t do that” or “I wish I could do that” or “but your shoes are atrocious.” Don’t make it about you. If women could be supportive of women in an unqualified way…maybe the opinions of all those men in those male-dominated STEM fields would be easier to navigate. Be in someone’s corner. Tell her that bread is delicious. Tell her that PhD looks really fine on her. Tell her that the screaming tantrum her toddler threw is not a sign of failure, it’s normal, and you appreciate how she handled it. Be her fan, even when it’s awkward and makes you feel slightly silly.

You may want to put more thought and effort into your supportive actions.

I’m not sorry I went over and did my fangirl routine at the smart lady scientist. Sure, it was sort of awkward at first, but by the time I got to my little “Yeah, Science!” hoppy cheer[3], she had pretty much decided I was just a harmless nutter. I’m going to work on my technique and do it again the next chance I get. Maybe I will start carrying an autograph book with me and collect signatures–because getting a doctorate full of sciency goodness is a hell of a lot harder than running a 5K. Women of STEM, I am unabashedly a fan. Give me an S! Give me a C! Give me an I…. 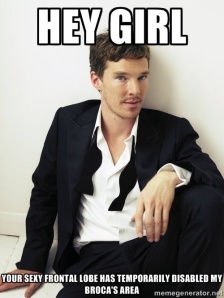 [1] A Mass of Humanity is any group of people over six, whether I know them all or not.

[2] I made up this word, as far as I know. It’s far more than just being nice and giving an occasional compliment. I probably should write a whole “thing” about it. It means ditching your own insecurities and competitive judginess, and just helping another woman see something about herself that she desperately needs to. For example—fighting for your employee to get the raise she deserves, so you can tell her that she kicks ass tangibly. Or telling a woman who is habitually thoughtful that you admire that, and want to be her when you grow up. TELL them. It’s a personal touch. It’s someone you know, or someone you would like to know.  I have mixed feelings about “FEMINISM,” but that doesn’t mean I’m not into women.  Wait… um.  …  I have no graceful exit from that.

[3] Yes, I really did a little cheer and hopped up and down. This is the part of the routine that needs the most work. The French judge didn’t deign to score it, and the Russian….yeesh. Ouch.