It’s a shame that pirates
Get parrots by defaulty.
I would get a little dog
And name him Mr. Salty.

He could distract the targets
By asking them for scritches,
While I most efficiently
Relieved them of their riches.

With my Salty sea dog
The plank I’d never walk.
A dog can bring you jail keys.
All a parrot does is squawk.

I confess, all of that was because I thought it would be funny to name a dog “Salty.” I think of a lot of these things as I’m falling asleep, and I text them to myself. If the guys in black suits ever look at what I’ve been saying to myself, they’ll either make me a very high priority or decide I’m not any kind of threat at all. Arrr.

I’m also pleased to present this example of why I don’t do my own illustrations. Ta Da. 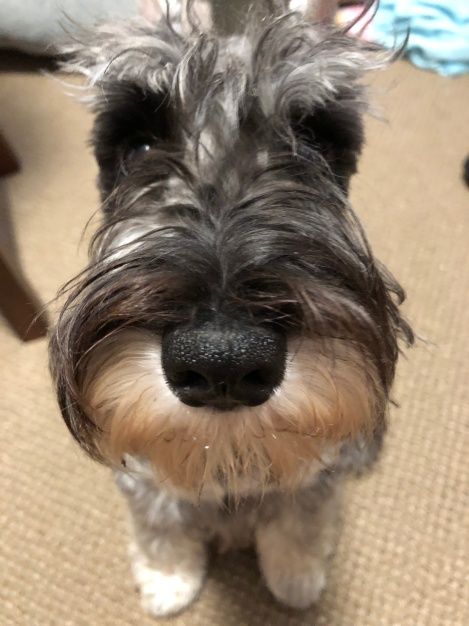 Not a ball of fur, bigger
Halfway from pup to dog
You named yourself Hazel
We agreed and signed the paper

Remembering
the end starts
with a beginning

When we lost our dogs, Daisy and Dot the dachshunds, they’d been in our lives for 15+ years. I still have moments where I think of them and grieve, two years later, so I wasn’t surprised to have a few bittersweet moments as I fell for Hazel, our half-grown Schnauzer. Hazel doesn’t know about any of that, she’s currently concerned with what room I’m in and why those kids are so loud. I’ll have to try to live in her moments, the ones that are right here, where nothing is wrong and there is no end in sight. That’s dog magic. I’m glad we have magic again. 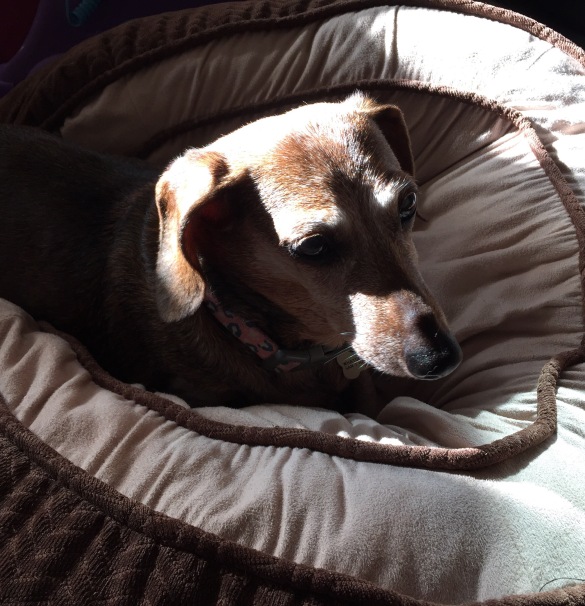 There is an empty space of bread-box size,
Six inches from the floor and always close.
It was occupied by gentle brown eyes,
Soft nudging on ankles from cold, black nose.
I take my walks all alone and unleashed,
The crumbs under table stay where they fall.
Only the sea smell comes home from the beach,
The bright steel bowls take no space in the hall.
No nails will scrabble to joyfully greet,
The UPS man hears silence, escapes.
Gone, snarfle and crunch of phantom small treats,
The solidity of memory unshapes.
—-Long, small shadow is not where it belongs,
—-At this moment, we are in-between dogs.

She was my Special Dog, and really the Best Girl.  We’ve been waiting to get another dog for life things to pass (vacations, etc…) but I am getting antsy for another four-legged best friend.  The empty spot hasn’t filled in, even after all this time.

(And here’s the sonnet!  Some of the iambs are suspect, but hey, we’re working to a deadline here.)

I’ve heard that tidying up
Creates some sort of magical joy.
That memo got lost in transit
To my soft-hearted medium boy.

The pile of stuffed pups alone
Would give the famous tidier fits.
But Mrs. Dog is here to stay
And so are her 99 kids.

They all have names and jobs,
Some hounds are secretly super.
The dust they put out when handled
Would leave Superman in a stupor.

This pile of friends doesn’t light up my life
When I’m stacking them on the bed.
I think I should just hug medium boy.
My joy seems to live there instead.

Everyone is on the tidying train it seems.  I did it to my sock drawer.  My sock drawer is pretty fabulous, I admit.  This magical tidying does not affect any of the other creatures that I live with, however.  It must be a very short range spell.

Sitting in the nail salon, getting a second-tier pedicure, and overheard this exchange at the door:

Woman Poking Her Nose in the Door (Woman):  Does anyone in here have their dog in the car?  Is anyone’s dog left in the car?

Perfect Stranger Minding Her Own Business:  My dog is in the car.  Is there something wrong?

She is  Not.  A.  Fan.  This has stuck with me for weeks, for several reasons.  No obnoxious inflection.  It was not, “I’m not a FAN of that.”  She simply wanted to let us know that she wasn’t going to hit the “Like” button anytime soon.  I don’t think the woman getting her nails painted was campaigning for fans.  I saw no evidence that she had taken a poll.  I’m betting (just a hunch) that she doesn’t have a blog called “Leaving Dogs in Cars” that she updates obsessively and checks the hits on every five minutes.

Before you decide I am on the dark side of the force here—I don’t take my dogs in my car.  They are geriatric pups who DO NOT enjoy the car, and if the temperature is one degree above balmy, they start acting like wee dachshund drama queens having their toenails torn out (or clipped).  I am not saying that leaving your dog in the car in warm weather is great.  I am saying:  If you are going to attempt a public shaming of a complete stranger, please have a better punchline.

As a public service, here are some suggestions:

The Soapbox Preacher:  “You, Madame, are in league with Satan himself, and I shall forthwith make a cardboard sign decrying your villainy for the entire world to see.  The people will see it, and the shame reflected on humankind will make them WEEP.”

Here’s a template for a cardboard sign. This must be a very sad place to live.

The Psychotic:  “Really?  That’s your dog?  Because it looks a lot like MY DOG.  The dog that disappeared when I was eight, and my parents said went to a farm.  I know it didn’t go to a farm, though, because I called all the farms in a 500-mile radius.  I think YOU have my dog.  I think insert random dog name is in your car RIGHT NOW.”  (Even better if you are 40ish like me, and the dog couldn’t possibly be insert random dog name.)

The Barney Fife:  Go ahead and make a citizen’s arrest.  Point at the offender and yell, “I hereby arrest you!”  Dig around in your purse/pocket for something to restrain them with, like a set of headphones.  Look at the item, say, “Well, shoot, guess I need to call Andy, ‘cause this ain’t going to work for handcuffs.”  Walk out whistling the theme to The Andy Griffith Show.

Keep it in your pocket, Barney.

The Reality TV Moment:  “Great!  I’m a producer for the show, “Animal Neglect: Mobile Edition,” and I’d like to get your signature on a waiver so that we can show your dog on TV.  You’re going to be famous!  Please spell your name for me so that we can get it right in the caption.”

The Marcel Marceau:  Everyone loves mime.  Once you’ve found the nasty culprit, start into an extravagant set of mimed gestures that make it clear that you are really mad that the dog is trapped in a box.  Extra big bonus points if the wind is blowing or there are unexpected stairs/ropes.

The Simplicity Itself: “It’s dead.  It was too hot and its head exploded like a can of biscuits.  Sorry to have to tell you the bad news.” 1

Evil prospers when good people do nothing, I know that.  There are times when you are morally obligated to speak up or out or against some behavior, even in a room full of people you don’t know.  But do it with some flair, people—some blown-up, memorable, she’ll-think-twice-next-time FLAIR.

1 I was going to insert a picture of an exploded can of biscuits here, but that’s a mess to clean up and you didn’t really want to see it anyway.  Let’s just pretend.